Apart from the beautiful and ancient architectures, the mystical spiritual story of the Thien Mu pagoda is really attractive to the curiosity of tourists. 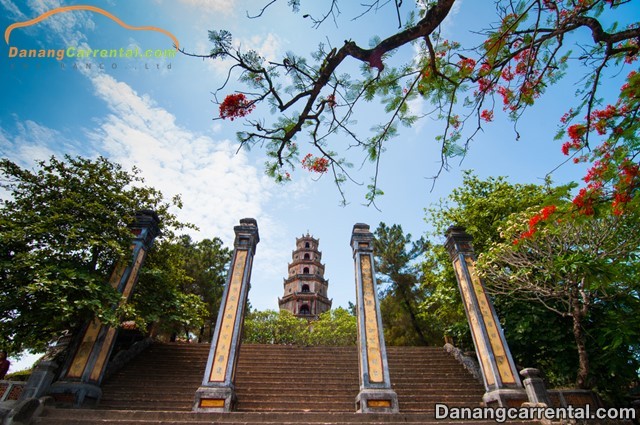 Thien Mu pagoda is located on Ha Khe hill on the bank of the Huong river, about 5 km distance in the West of Hue city center. This is the oldest temple, but this pagoda has the most massive architectures and is also the most beautiful pagoda in Hue city. Apart from the beautiful and ancient architectures, the mystical spiritual story of the pagoda is really attractive to the curiosity of tourists. Follow Kha Tran to know more about this famous tourist destination.

According to the legend, when he came to the Thuan Hoa and Quang Nam, King Nguyen Hoang personally went to the site to prepare for the plan to expand the business, Nguyen later. On a horseback ride along the Perfume River to the upstream, he encountered a small hill rising over a meandering blue river called Ha Khe Hill. The land is like a dragon looking back, so in 1601, God built a pagoda on the hill, has a frontage to the river Huong and named Thien Mu. Nguyen Hoang, in 1601 built a pagoda on the hill, turned to the Huong River, named “Thien Mu”. 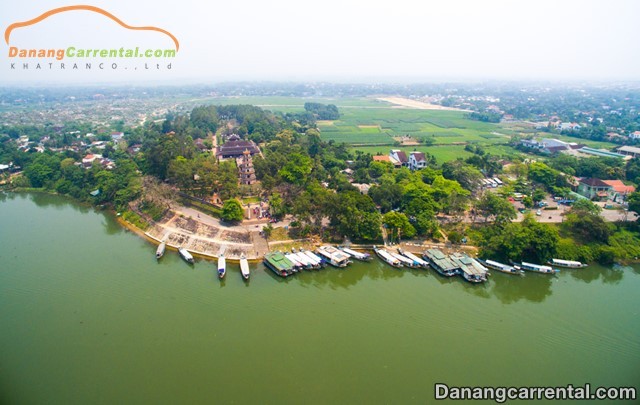 At this time, local people say that there is an old lady dressed in red shirt and dark green pants, she appears on the hill and talks to people that: ” There will be a Lord coming here to build a pagoda in order to lay the foundations for the development of Viet Nam. Therefore, the construction of Nguyen Hoang here seems to be suitable for the wishes of the people. That is the reason why the locals are very supportive him.

In 1862, in hopes of having children and fear that Thien Mu is a sacrilege to the heaven (“Thien” means Heaven), Tu Duc renamed the pagoda into Linh Mu, meaning holy lady. Later, people used both Thien Mu and Linh Mu to call the pagoda.

With the great investment, Thien Mu became the most beautiful pagoda in “Dang Trong” at that time. Today, the ancient Thien Mu pagoda still reflects quietly in the beautiful Huong river and becomes an indispensable destination of tourists in Hue.

The campus in front of the pagoda is a boat landing with 24 steps up and down, Tam Quan gate, … Through the ups and downs of history, Thien Mu pagoda was used as a place for offerings under the Tay Son dynasty (circa 1788). Under the Nguyen lords, Thien Mu pagoda in Hue has undergone many major repairs. Most notably, the restoration was expanded under the reign of Lord Nguyen Phuc Chu (1691-1725). 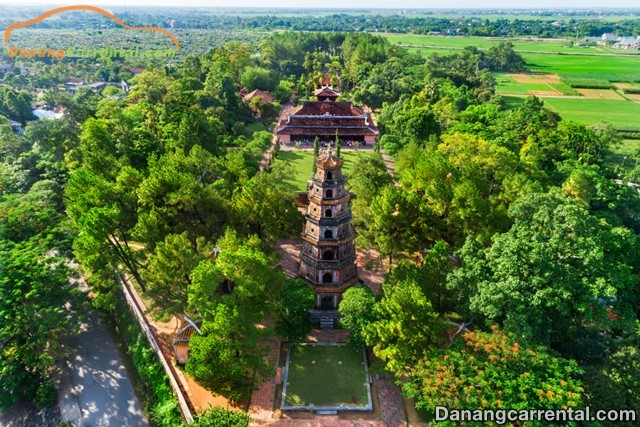 In 1710, the Lord also asked for casting a large bell of the Dai Hong Minh, weighing over two tons, on the bell which was carved a poem on it. In 1714, Lord Nguyen Phuc Chu continued the great restoration of a series of large-scale architectural works (Dai Hung temple, Thien Vuong temple, Thuyet Phap house, Tang Kinh floor …) Then, he worte a composition and talked about the construction of buildings at the pagoda by himself. In particular, the lord also asked some mandarins to come to China to buy more than 1,000 sets of Buddhist scriptures put in the Tang Kinh.

In addition, in front of the tower, King Thieu Tri also built Huong Nguyen. On the roof of the village hall has set up the “Phap luan” (Buddhist wheel – the symbol of Buddhism) but in 1904, the village hall was collapsed by a large storm. 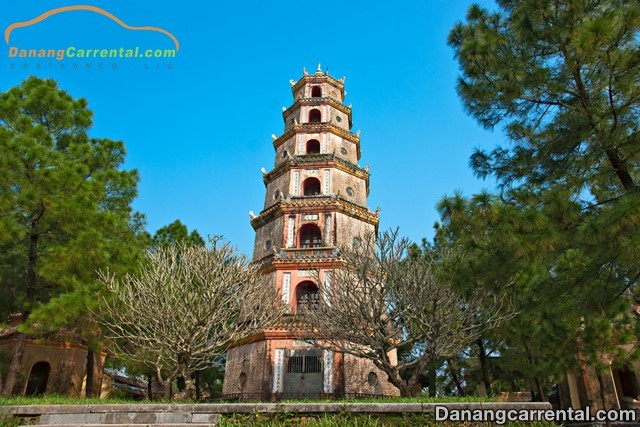 Each architectural work whether built under any dynasty, also expresses the belief, solemn and harmonious with the previous works. At present, Thien Mu pagoda in Hue keeps two records of Vietnam: the pagoda with the largest headstone in the Le Trung Hung dynasty and the pagoda with the highest octagonal tower. In addition, the pagoda is also ranked 20 landmarks of Hue city and is a destination which does not overlook in the Hue tour.

The vow of love

Not only famous by beautiful scenery as well as ancient and majestic architecture, Thien Mu pagoda also associated with the mystical spiritual stories which is attractive the curiosity of tourists near and far away.

It is said that, when Nguyen lords ruled in “Dang Trong”, the idea of “parents can make decisions for their children” is still carried out strictly. At that time, there was a daughter of a wealthy family and a poor orphan that fell in love together.Because their parents banned, they went to Mu pier (the pier in front of Thien Mu pagoda) to be suicidal together. 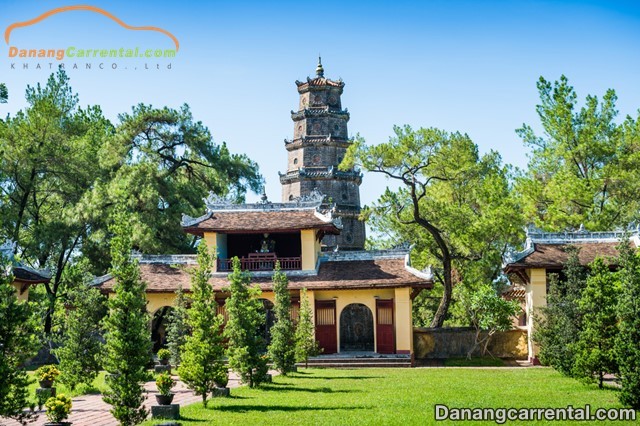 Ironically, when the man dies, the woman is rescued by the people near there. Later, she was forced to get married to a rich mandarin. As time passes, the woman gradually forgets the love with the old man and live happily the rich life. Therefore, the man’s soul in the river waited for the lover for a long time but could not see her. Then, he bore resentment against her and curse at all the couples who love each other to the pagoda will breakup.

However, according to the sharing of a monk in Thien Mu pagoda,formerly because the pagoda has many big green trees, so the couples come to the pagoda often make a date here. Therefore, the local people have created the story to keep the purity of the pagoda.

It’s just a vow by word of mouth from this generation to other generations. However, over four centuries, the curse still exists, some people do not believe but many couples are not dare to visit each other to the pagoda. This makes the vow as well as Thien Mu pagoda become mysterious. 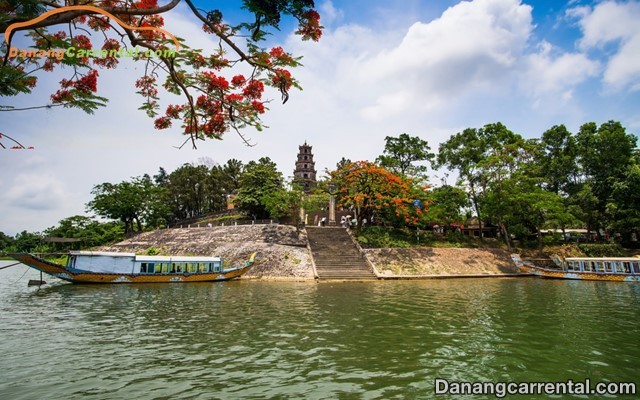 The pagoda always has existed in the local people’s mind in particular and the cultural life of the Vietnamese people in general. Day by day, the bell of Thien Mu pagoda still resonates like the soul of Hue and gives the tourists hearts a feeling that is impossible to describe about the place. In the pagoda, visitors will feel calm, peaceful and leave behind the anxiety in everyday life. As the poet Quach Tan wrote, “Those who are afflicted by fame and fortune, will be peace in their souls”.

Along with Thien Mu pagoda, Hue also has many ancient architectures and other beautiful landscapes.