Khai Dinh Tomb – The Most Unique Architectural In Hue

Beside Minh Mang tomb with traditional beauty, charming full of color, Tu Duc tombs are attracted to people by the paintings charming nature, the tomb of Khai Dinh always have the attraction of tourists when traveling Hue With the works are designed very elaborately, splendid, bringing the color combination of sophistication between the two cultures, East-West culture. 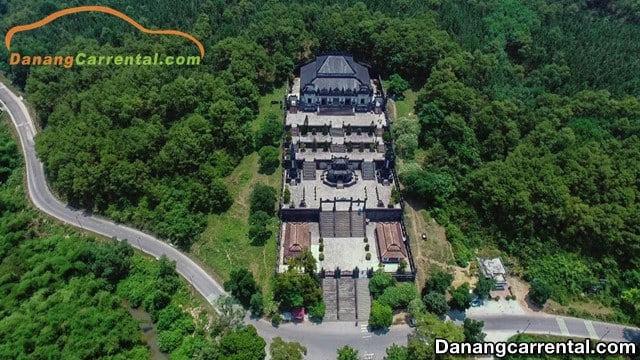 Khai Dinh Tomb (also known as Ung Lang) is the resting place of King Khai Dinh (1885 – 1925) the 12th king of the Nguyen Dynasty. Mausoleum is located on the slope of Chau Ngu Mountain, southwest of Hue Citadel, in Thuy Bang Commune, Huong Thuy Town, Thua Thien Hue Province. It is about 10km from Hue city.

Khai Dinh tomb originated in the interference of East-West culture, the traditional culture was faded but also opened a new view, a new architecture, reflecting the lavish nature of the king at living time.

Stepping onto the throne at the age of 31, King Khai Dinh was engrossed in the construction of temples, palaces, mausoleums,… such as Kien Trung Palace, An Dinh Palace, Hien Nhon Gate (East Gate of the Imperial City) Chuong Duc Gate (West Gate of the Imperial City). Among these works, the construction of Ung Lang, where the rest of the king was invested specially elaborately. 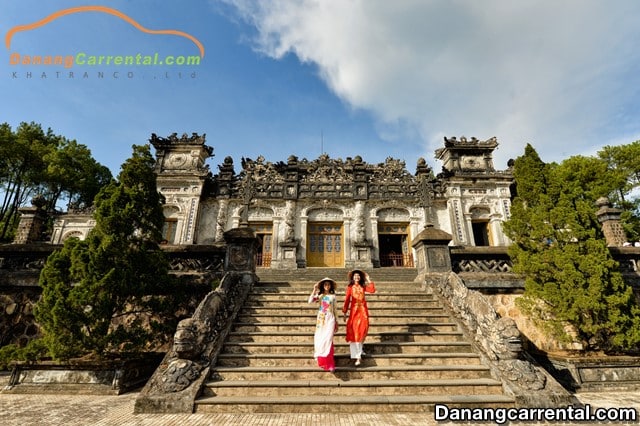 In order to build his tomb, Khai Dinh had been refered many projects of the geographers and eventually chose the Chau Chuc mountain (also known as Chau E mountain) as a location for his rest placing. The terrain of Khai Dinh tomb is calculated very carefully, creating a magnificent natural scenery.

Compared with the tombs of the predecessor kings in the Nguyen Dynasty, the tomb of KhaiDinh is the smallest. Ung Lang covers an area of about 0.5265 ha with a length of 117m and a width of 45m. However, Ung Lang is the most invested construction work, the most construction costs, the longest construction time and the most modern tomb in the system of tombs in Hue.

Khai Dinh tomb was officially built in 1920 and until 1931 (11 years later) was completed.
The unique architecture of Khai Dinh Tomb 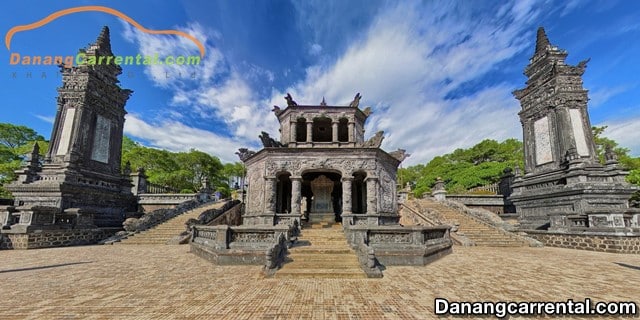 Khai Dinh Tomb was built by many of the most famous artisans. Artist Phan Van Tanh is responsible for the creation of artistic masterpieces in Khai Dinh tomb, he is also the author of three murals “Cuu Long hides cloudy” the most decorated Vietnam.

In order to serve this great architectural work, a large volume of construction materials imported from abroad, completely different from the traditional materials of the country such as wood, stone, lime,… Typically cement, iron, steel, tile imported from France, porcelain, decorative glass inside the mausoleum purchased from China, Japan.

In order to have finance to build a great tomb, Khai Dinh King has also increased taxes by 30% across the country. This action of the king has been harshly condemned by the people, leaving a bad image of an “son of heaven” in the hearts of the people. But it is costly and elaborate that has created a masterpiece of architecture that anyone who visits the tomb of Khai Dinh is admired. 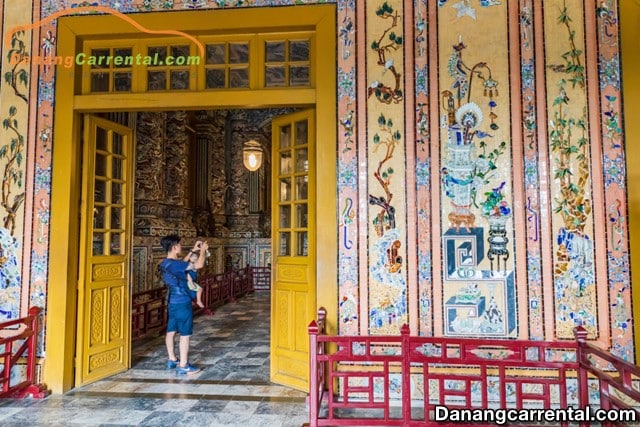 Khai Dinh tomb is the interference between Eastern and Western architecture, bringing many new features, unique. Khai Dinh Tomb emerged as a medieval castle in Europe with 127 steps leading to Thien Dinh Palace amidst the green pine forest.

Thien Dinh Palace is the main architecture contains the most important artistic value in the tomb. The whole interior of the palace is decorated with beautifully decorated reliefs, carefully crafted from porcelain and glass, through the skillful hands of the leading artists at time.Therefore, Khai Dinh tomb became a masterpiece of ceramic and glass art to the peak. Even the small details on each pillar, the fence is also the art form extremely sophisticated, meticulous. In addition, the interior works are decorated with modern items bold Western architecture at that time such as tea tray, crown, tennis racket, oil lamp, … All in harmony create a The whole is splendid, magnificent.

Tomb of Khai Dinh King is located in the center of Thien Dinh Palace and is also the most beautiful decorated room. Above the tomb is the statue of Khai Dinh King sitting on throne which gold-plated bronze cast in France in 1922. Underneath the throne is the Tam Tai step: Heaven – Earth – Human. 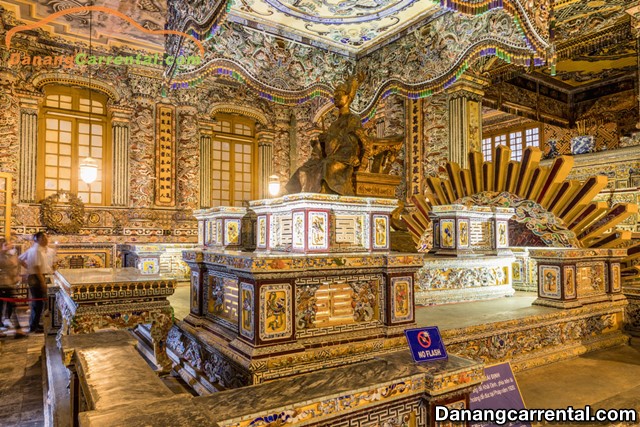 Along with the other famous relics in The Complex of Hue Monuments, Khai Dinh Tomb was also recognized by UNESCO as World Cultural Heritage “Delicate Khai Dinh”. Although the work was historically condemned, the people of that time were very complaining but can not deny that Khai Dinh Tomb is a unique architectural masterpiece unique that surely you can not miss when traveling in Hue city.

Hopefully with above information, you will have more useful information to help you when traveling in Hue. For more specific advice or rent cheap car to visit famous sites in Hue, do not forget to contact Kha Tran Car rental via hotline Ms Katharine: (+84) 9 1651 0201 – (+84) 3 4797 6789. Wish you have a trip to Hue is fun and complete!

BARS IN HOI AN, VIETNAM