Hue is a city with many unique architectural works, with many temples and tombs bearing the historical imprint of the Nguyen kings. Coming to Hue, in addition to visiting places like Dai Noi, Khai Dinh tomb, Tu Duc tomb … you should visit the Hue   Museum Of Royal Fine Arts to be able to admire the artifacts, as well as learn about the royal life of this ancient city.

It is located at No. 3, Le Truc Street, Hue City. In 1923, with the first name is Khai Dinh Musée. After, it  has been renamed several times with different names, untill 1992, Hue Royal Fine Arts Museum is official name. 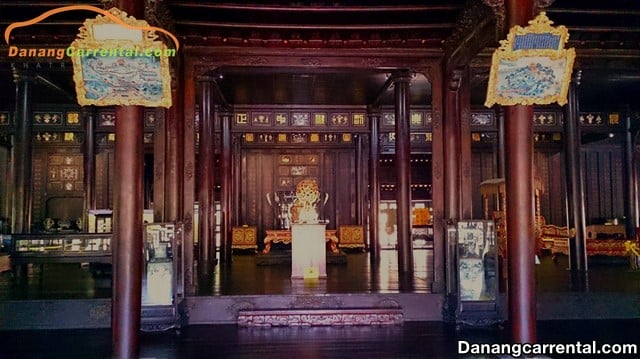 The campus of Hue Royal Fine Arts Museum is 6.330 m2 wide. It consists of a main building in the middle of an area of 1.185 m2 and some auxiliary buildings used as stockpiles of antiques and garden.

See more >> Hue tourism: Travel handbook from A to Z

The main building is Long An Palace, it was built in 1845 and became the Library of Quoc Tu Giam School under the reign of the Nguyen Dynasty, named Thieu Tri.

Further more, this place is a beautiful structure with 128 columns, on each columns standing out with carved four animals spiritual.

Currently, the museum displays more than 300 artifacts made of gold, porcelain, royal items and royal uniforms, the costumes of the Nguyen Dynasty, giving visitors an overview of Hue court life.

The artifacts in the museum were collected and stored since 1913 (when Hội Đô Thành Hiếu Cổ was founded) until before 1945. There are about 10,000 items here. Among them, belonged to the imperial household, the royal furnitures, the fine art works in the palaces … with many materials, gold, silver, pearl, bronze, ivory, glass and paper,…

It can be said Hue Royal Fine Arts Museum is a collection of ceramics of the Nguyen Dynasty and other countries. In the museum, there are up to 700 artifacts of pottery, glazed pottery from the Ly to the Nguyen Dynasty. In addition, there are also Chinese, Japanese, French ceramics.

What’s more, the museum is a place to preserve to thousands of other artifacts. The most famous artifacts here are glazed earthenware, also known as “Bleu de Hue”. In glaze ware store, there are also some made in France, Japan, Britain, USA … About 100 clothes of kings, queens, princes, mandarins, soldiers are also kept in fabric store. Additionally, the museum also stores a lot of priceless artifacts. 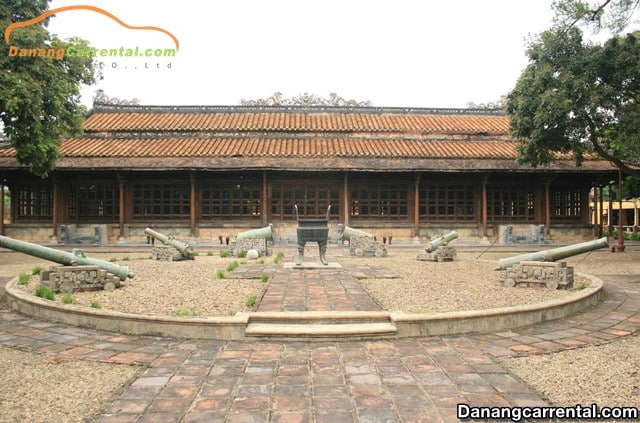 On the campus of Hue Royal Fine Arts Museum, there is another storehouse that houses more than 80 Cham artifacts collected in the ancient “Châu Ô” and “ChâuLý” in the past, and archaeological excavations in Tra Kieu in 1927. Besides that, Cham artifacts- precious cultural heritages is also things attracting plenty of visitors.

Hue is the capital of Vietnam under the Nguyen Dynasty, where the living and work of the imperial mandarin and the place of unique game. The game of the imperial mandarins and upper classes was very rich at the time. In the reign of King Bao Dai appeared many more Western – style games. In particular, Bao Dai and Tu Duc have a very special game and they are very good at playing this game, it is called “Đầu Hồ“. 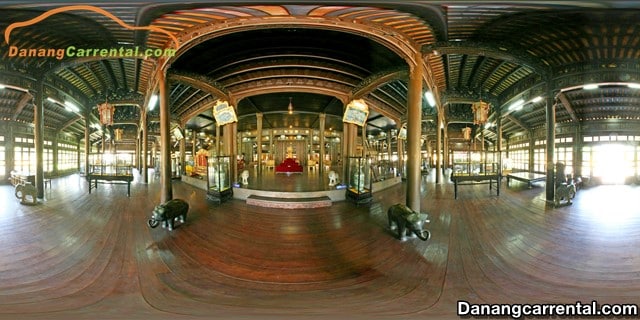 Collection of porcelain in Long An Palace

The costumes of the Nguyen kings are also of many kinds. Each type has its own name, color and is only worn on specific occasions. It can be divided into groups: ritual costume and finally, casual clothing,…. Each group includes: shirts, hats, belts, trousers, boots,… tailor made in their own way, called separately and bring different color patterns. Presently in The Hue Royal Fine Arts Museum also kept quite full of the costumes of the Nguyen Dynasty.

Antiques in the Nguyen Dynasty relics

Hue Royal Fine Arts Museum has a unique and valuable collection of coins which arranged in a unique way in Vietnam. The theme “The currency circulated in Vietnam from the Northern domination to the Nguyen Dynasty” reflects the life of the Vietnamese people at that time. This also gives visitors and researchers a new perspective on the collection of coins.

All the artifacts displayed at Hue Museum Of Royal Fine Arts  are valuable works of art made by skilled craftsmen. To see the unique artifacts, and to understand more about the history of the national culture, set foot on here!

Wish you have a fun trip with many memorable experiences.

Things To Do In Danang When It Rains